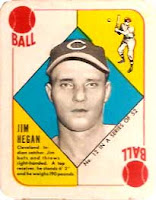 As may of you know, I have collected baseball cards. In 1980 and 1981, my dad would bring home packs of baseball cards and, after dinner, we would sit around and open them up. I would trade with the other kids in the neighborhood in order to complete the set. Around 1984 or 1985, I attended my first baseball card show at the Pikesville Hilton. Since I had started babysitting, I had accumulated a little bit of splash cash. I purchased my first 1951 Topps Red Back that very day. 1951 was the first year Topps had produced a baseball card. In addition, the card I purchased (not shown) was #44, Sid Hudson of the Washington Senators. The card, I think, cost me $10. But, it was history. It was from the first Topps series ever. And, the card was nearly as old as my dad. Plus, it was of a Washington Senator, a team that no longer existed.

My collecting of cards continued through the years. Instead of packs of cards, I purchased boxes of cards. Instead of trading, I would attend card stores and purchase what I needed. And then the internet provided me with many more resources to purchase cards (and get rid of those I did not want). I was always dedicated to the Topps brand getting whatever cards needed to complete the set. Always a hand-collated set. None of this cheating of buying complete sets. And while this was happening, always keeping an eye out for other 1951 Topps Red Backs.

My wife would get in the game helping me find the best conditioned cards. No longer was I looking for Mint cards. A card from 1951 merely had to not have creases across the face of the player shown on the card for it to qualify for my set. Players like Yogi Berra, Al Kiner, Duke Snyder, Bob Feller and Warren Spahn were part of this 52 card set.

Only 52 cards to collect and, finally, on December 23, 2008, I completed the set. My dad asked me, what is a completed set? I told him it was 1 of every player in the set. The reason I said it this way is that this set has two variations. Two different players (Gus Zernial and Tommy Holmes) had cards that were produced with different information on them. I have one of the variations of each player. I will continue to search for the other variations of each player and when I get them it will be "extra credit".
I have seen the set valued for around $750 on the internet. As far as I am concerned, it is priceless. Here is a link with a brief description and checklist of the players in the set: http://www.baseball-almanac.com/baseball_cards/baseball_cards_oneset.php?s=1951top01
Posted by Mitchy the Kid at 5:30 PM